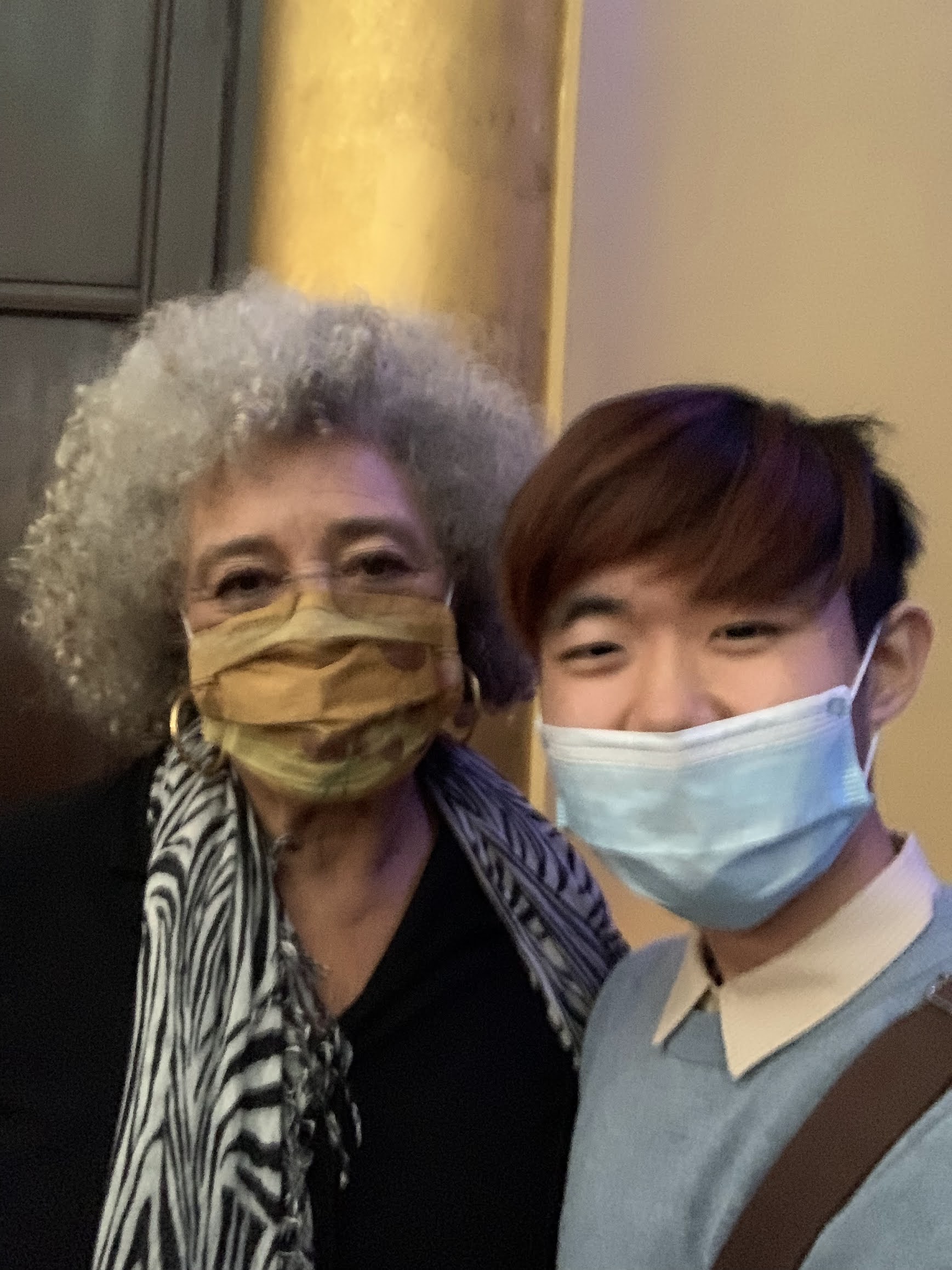 The young man's mother, watching the searching, exclaimed to him with exasperation: "Why are you looking in the same place over and over again? Your socks clearly aren't there, and you should be looking anywhere but there!"

Angela Davis shared this story tonight. She wasn't talking about socks, of course. She was talking about police and prison abolition. We've tried protesting for humane prison conditions. We've tried protesting for police accountability. Instead of finding our metaphorical socks, we've seen an explosion in the number of prison facilities and incarcerated people, and no stemming of the tides of police violence. So our metaphorical mothers tells us, with exasperation, to leave behind the fruitless desser and start looking elsewhere: alternative public safety systems to policing and alternative justice systems to mass incarceration.

To convince people that a certain perspective is common sense is no less than to create social and cultural change, and political and material change in turn. There's more to prison abolition in two directions, of course: in one, the lives and humanity of so many individuals and communities, and the concrete movements against their oppression; and in another, the statistics and abstract ideas that "leading figures" like those invited to CMC's recent Atheneum debate on prison abolition are invited to fill space with.

But this common-sense-change model for social/cultural change is intriguing to me. "...often when the cognitive unconscious elements move from the background to the foreground, there is a cultural paradigm shift that accompanies the new understanding of the sensory world. This movement is what can be considered...the foundation of cultural revolution," John Farman writes in the statement of his sensory-symbolic model for media engagement (which I mean to write about soon). The power to shift the default, unconscious layer of interpretation is no less than the power to change the status quo, and it's a power that Angela Davis possesses through her speech that I'll never fail to be in awe of.

This is the second time I've heard Angela Davis speak. The first time I credit for beginning the process of my radicalization, if you can call it that, when I began to understand and find energy in ideas of radical, systemic social change. That was two years ago. Notably, police and prison abolition became not a radical fringe but a mainstream mass movement for some time in-between the two talks, and Angela Davis acknowledged it tonight. "Most of us working in prison abolition never thought we'd see the day that prison abolition became mainstream," she said (to the best of my memory and frantic notes). There was the danger that the ideas being advocated for would "lose their radical edge", but the excitement of such widespread movement of people's previously unquestioned beliefs was undeniable. Referencing the lost socks story, many people are finally starting to realize that it makes sense to look in places other than the dresser, Davis said. "It's very energizing."

The other key theme that Davis drove home was that of the necessity and value of community. "I never did any of that as an individual," Davis said, countering her interviewer's list of her intellectual contributions and personal triumphs over hardship. She credited her own scholarly work to the people around her who already had those ideas in mind. It's the same mindset as she took when writing her autobiography almost fifty years ago, emphasizing as much as possible the grassroots basis of her work and freedom. "I don't want to be remembered as an individual, truly. I want to be remembered as part of a group of people who showed that change is possible."

This also helped me put together some thoughts about a question that had previously been deeply on my mind: how does one oppose a system without either working to overthrow it outright, as Lenin incensed Russian social-democrats to do, or being complicit with it? Milly provided an immensely useful and appropriately radical answer when I talked to her a few weeks ago: think about who you're choosing to work with, who you're identifying with, and who you're trying to help. Angela Davis expressed my very question, and her whole talk reinforced Milly's answer. "Much of my life has been about straddling contradictions without giving into the urge to resolve them," she said. Revolutionary joy came not from Lenin-esque total revolution, but from targeted acts of resistance: mobilizing colleagues to support the Black Panthers; working to free political prisoners; finding joy in childhood by turning violating segregation into a dare.

I'll leave my thoughts here for now. Many of the stories and ideas from today's talk I was somewhat familiar with, though I have so much to learn still and would come back again and again to hear Angela Davis speak about them. Thursday's topic is explicitly visionary rather than biographical -- I'll be there for round three 😁